I have just returned from the first "official" Mon Voyage Small Group Trip, whereby I returned to Grand Teton and Yellowstone National Parks after a five-year absence and with a dozen other people in tow. DH Bill was scheduled to be my escort/sidekick but due to illness he was unable to travel, and my father Louie graciously stepped in to assist me. Accompanying us were Joan & Harvey, Karen, Jeanie, Shirley & Ricardo, Jill & Tom with daughters Emma & Anna, and my trusty cousin Sara. 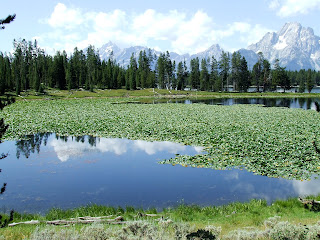 We arrived in Grand Teton NP on Saturday afternoon at Jackson Hole Municipal Airport, and went about getting settled and organized after making the obligatory stop in Moose to stock up at Dornan's grocery/deli, and more importantly, its handy-dandy and very decent wine shop. We checked into Jackson Lake Lodge cottage units and immediately set about enjoying our little patio with a cocktail and a view. Most of us had dinner together that first night at the Mural Room, and enjoyed the sunset vista of Mount Moran. Almost everywhere you go in the park, you are treated to magnificent views. 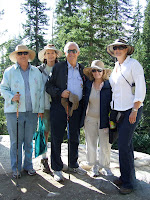 During our days in GTNP, we explored the peaceful, scenic Swan Lake/Heron Pond loop hike as well as the uphill ranger-led Hidden Falls and Inspiration Point hike on the west side of Jenny Lake. (You've got to get there early to get one of 25 tokens if you want to accompany the ranger--we were first in line, because we needed 13!) 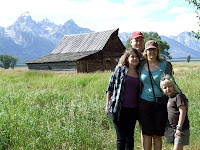 One morning we took a breakfast cruise on Jackson Lake, which included a hot western food spread on Elk Island, again with a dazzling view of the Tetons and Mount Moran to make everything taste even better. We rode a replica pontoon ferry across the Snake River, and repeatedly ate fresh trout farmed in it. 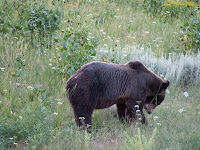 Animal sightings included an injured moose ensconced just outside the lodge, a beaver, plenty of bison down in the Antelope Flats area...but the best was following some scuttlebutt up to the northern border of the park, where we were "treated" to a grizzly bear roaming around and eating in the ravine next to the roadside where we parked, and then finally deciding to cross the road about twenty or thirty feet from our car. We had not seen a grizzly on our first trip here in 2005, so this was an exciting sighting for me!

We had excellent food at the Mural Room and Pioneer Grill at JLL, and fine views at Signal Mtn Lodge Trapper Grill, but the highlight was our lunch at Jenny Lake Lodge. I think we all cleaned our plates that day! 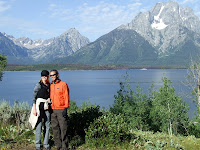 On the fourth day we packed up and headed north to neighboring Yellowstone National Park, which is our oldest NP and dates to 1872! Both parks have interesting histories, and I recommend Ken Burns' PBS series on the National Parks for the backstory on how each was created.
Posted by Nicole and Mon Voyage at 1:12 PM