I am a real aficionado of Hindi films, along with the music that enhances them. Half the music on my iPod is probably Indian tracks, and I own 50+ Indian films on DVD. I call myself the Texas Bollywood Evangelist (even though Bollywood only refers to Mumbai-industry, Hindi-language films, or no more than a quarter of the films that are made in India). I've even given talks at my local school as well as a community college to help enlighten and expose other people to the fascinating world of Indian film.

My dream trip is to spend a couple of months in India, soaking up the culture, sights and sounds of the subcontinent. But since that's not in the stars right now, I decided that the stars and India would just have to come to me. Only they could not get closer than 250 miles away.

Last weekend we drove to Houston to see The Unforgettable Tour, a three and a half hour Indian movie and music stage extravaganza headlined by some of the biggest movie stars in India. Make that the world, since India has practically a billion people watching movies, plus all the diaspora Indians living around the world. I was so excited about it that I got an awesome new salwar-kameez suit and dupatta for the occasion at one of our local Indian shops (such affordable prices!).

So who was in this show?

Amitabh Bachchan, the most celebrated Indian actor in the world... 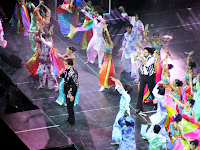 Madhuri Dixit, uncontestedly the best dancer and one of the best actresses of Indian cinema...

Abhishek Bachchan, son of Amitabh and a good actor himself; with his wife, actress Aishwarya Rai, called the most beautiful woman in the world and a fine dancer also...

Riteish Deshmukh, a younger actor (and son of prominent politician) who excels at comedic roles...

Music director duo Vishal and Shekhar, creators of the infectious music for the film Om Shanti Om and many other hits


And not to be forgotten, Choreographer Shiamak Davan and his troupe of energetic, graceful dancers did an amazing job and were really the basis for a great show!

The stars tried to invite me up onto the stage to dance with them, but they could not reach me in the top of the arena in the cheaper seats...

Besides all the spectacular dancing, I enjoyed Amitabh's recitation of some of his famous dialogues even though I don't speak a word of Hindi--that's how good an actor he is. (He did summarize in English before speaking in Hindi.) He also recited of one of his poet father's famous works, Agneepath. If I can find a good English translation I'll post it.

The far-away pictures were taken by me, and the extreme closeups are provided by the production company WizCraft. Whoever designed the staging and sets, lighting, etc, also achieved a beautiful result. Here is a video of one of the undisputed high points, when Madhuri and Aishwarya danced together on the song "Dola Re Dola" from the movie Devdas.

Also attended the press conference with the stars. The "press" consisted of mostly entertainment or popular Desi media, even a couple of starstruck types, and only a few serious journos (like my husband) who wanted a deeper, more intellectually sophisticated story; and the whole lot of them were treated...not so accommodatingly...by the producers and organizers.

There's another world tour in the works, "Temptations Reloaded" starring Shah Rukh Khan, the "King of Bollywood". I'd love to see that one as well if they manage to get to Texas. Maybe a Dallas promoter will be able to afford it since the "Unforgettables" went to Houston...it's only fair, right? Barring that, a promoter in Atlanta is hinting at it, and I could stay at my sister's house...

I have to paste this amusing article that appeared at the time of SRK's new tour "kickoff" in Rotterdam...I have to say that show was obviously timed to take attention away from the Bachchans' tour, because there are only two other "Temptations" dates announced...anyway, here's the article from IANS, which conveys the fun of Bollywood:

Shah Rukh performed on stage with Bollywood favourites like Arjun Rampal, Katrina Kaif and Kareena Kapoor in an auditorium with a capacity of 25,000 before a mixed audience of Asians and Europeans.

In between the two-and-half-hour long show, Shah Rukh and Arjun Rampal drove through the aisles of the auditorium in light vehicles and the venue echoed with the adoring screams of fans, some of whom showered them with trinkets, flowers and notes.

Some European fans were dressed in Indian clothes and referred to the Bollywood superstar as the 'Saudagar of Sunshine'. And Dutch fans preferred to watch Shah Rukh instead of the Euro 2008 football champion semi-finals between Holland and Russia played around the same time.

In a continent starved of warmth for most parts of the year, King Khan is called 'sunshine' by his fans here.

Ignoring weather forecasts that had predicted clouds and rainfall, fans travelled from all over Europe to witness the live performance.

With stars in their eyes, cine buffs arrived here under clear blue skies to watch the midsummer night performance and to sigh that the mere presence of Shah Rukh Khan makes clouds part.

'Shah Rukh Khan is our sunshine! When he is close to us, the worst day becomes bright. He fills my life with light and warmth,' an Indian female fan said rubbishing weather forecasts.

'Bollywood makes you happy' is the slogan for marketing popular Indian cinema in Europe, suggestive of the fact that Hindi movies create a state of emotional well-being that goes far beyond mere entertainment.

This is the reason for a dramatic increase in Bollywood fan communities on this continent whose activities revolve mostly around Shah Rukh Khan and his work.

'Bollywood makes European audiences happy because the films are like life seen in dreams,' Segolene Roudot, a French fan who is researching fans of Indian cinema in France, told IANS.

An online Swiss fan forum has a special web page filled with thank you notes to Shah Rukh for coming to Europe. The notes thank the superstar for the colour that he brings into lives and for being the light for fans in the dark.

'Such feelings become stronger at the possibility of a meeting with Shah Rukh Khan. The desire is to touch him in an attempt to experience some more of the joy and happiness that he radiates,' Elke Mader, a professor of Vienna University who monitors the behaviour of non-South Asian fans of Shah Rukh Khan for Bollyglobal, a research project, told IANS.

Mader gives the example of Christina Zuck, a Berlin-based artist who has publicly confessed that her life was magically transformed after she touched Shah Rukh at the Berlin Film Fesival of 'Om Shanti Om' earlier this year.

'The experience of fans like Christina goes beyond admiring Shah Rukh Khan as a movie star. Shah Rukh is seen much more than just an entertainer here. He is happiness and love personified. Fans want to touch him and to talk to him because he is able to transfer a lot of joy to those who are lucky enough to cross his path,' Mader said

Hosted by Netherland's Sekier Entertainment Service, the next European stop of Temptations Reloaded, a sequel to the 'Temptations' tour Shah Rukh started in 2004, is Berlin.

Founded in 1999 by Ishaq Sekier, a Dutchman originally from an Indian family from Surinam, with an evening of songs by Manna Dey, the entertainment service has since sponsored Sonu Nigam, Udit Narayan, Alka Yagnik, Sunidhi Chauhan, Shaan, Shreya Ghosal, Kavita Krishnamurti, KK and Jagjit Singh here.

'We would like to see Bollywood activities increase around continental Europe,' Monique Dabloe, a Sekier staff member, told IANS.
Posted by Nicole and Mon Voyage at 10:57 AM 1 comment: Links to this post