My RV client family leaves next weekend for the big Black Hills extravaganza. They'll be in a 31 foot class C rig with one slide (I sound like an old hand now, don't I?) as they make their way to Mount Rushmore, Badlands National Park, Devil's Tower, and finally Rocky Mountain National Park...and all kinds of spots in between. They'll park overnight at a variety of campgrounds, from official National Parks sites to family-owned spreads in the hills. Their Devil's Tower campsite even shows "Close Encounters of the Third Kind" every night. How cool is that? Devil's Tower on the movie screen with the actual thing looming right in front of you? I wonder if they get any special visitors out there...their RV is kind of big and flattish with a million lights...and it's like a giant synthesizer...

I've been to quite a few National Parks and Monuments but never to these, so naturally I want to visit these places myself now that I've put in the research time. It's just par for the course in this business, I reckon; I can't help traveling vicariously through my clients and in the end their trips just serve to lengthen my own to-go list.

Next up is a Paris-Brussels-London family jaunt with a side trip to Normandy...I've got these folks booked into all their top accommodations choices in areas I love, so I am particularly worked up about preparing this trip. We are on the same wavelength about most aspects of the trip, so it's almost like planning my own vacation. And we know how expert I am at THAT!

My own plans are rather tame for the near future, at least in terms of distance to be traveled: first up, a road trip to Houston to see a star-studded live Bollywood extravaganza. (Actually the first "journey" will be a root canal--I will SO need to have a dose of Bollywood after the dental horror.) Then my sister will apparently be getting married sometime in the next couple of months, so it looks like I'll be using that airline certificate I bought in the charity auction to fly to exciting Atlanta--oops, I mean HOT-LANTA.

Other than that, my DH and I hope to venture up to Washington, DC, before the end of the year to visit with several of his former colleagues, who for some reason have all independently moved there as though drawn by some...humongous pied piper spaceship playing a five-note tune. We look forward to witnessing some sort of gripping congressional hearing and/or a Supreme Court argument while in our nation's capital.

It has a name: jilbab.

If you have read the previous Istanbul posts, you know I have been pining for one of those "Islamic style" long coats I saw on so many women in Turkey. Well, now I now the name of that obscure object of desire: a jilbab. The term is actually one of several used somewhat interchangeably to describe Islamic women's outer garments.

Apparently the most attractive and highest quality jilbab(s?) come from...Turkey. No wonder I thought some of those sistahs looked fabulous, with their color coordinated scarves, clothes, jilbabs made of every fabric under the sun, from denim to shiny. Just 'cause they were covered didn't stop them from being fashionable. I even saw some women in the totally baggy black abayas that were trimmed with rhinestones (and a big honkin' sparkly buckle) or jet beading. 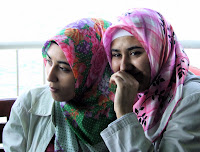 I also saw some younger women that were wearing funky dresses over jeans...I know this had gotten to be a trend in the northwestern US as of late, but I can't help wondering if it started over here as another, semi-rebellious, youthful way to cover up...it seems perfectly natural to see it in Istanbul, but goofy in Seattle or Dallas.

I still want one of those coats. A denim one.

And now maybe I can find one online, since I can't dash back to Turkey for it...