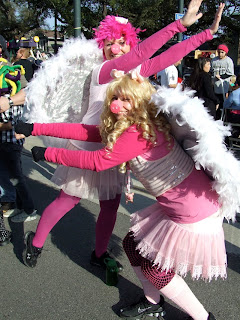 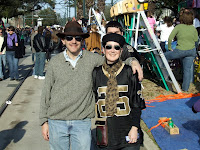 Well...it was the first but definitely unofficial Mon Voyage Small Group Trip. I coordinated a small group of friends and relatives to go to Cajun Mardi Gras in February and les bons temps, they definitely rolled! I must have had a six-month hangover because I have failed to post anything about that trip. Better late than never, n'est-ce pas?! We were two aunts, an uncle, a cousin, a few friends of said cousin and of an aunt, plus Bill and yours truly.

We started the festivities by attending super-parade Endymion in New Orleans. With the Saints fresh off their Super Bowl victory, Mardi Gras had turned into Lombardi Gras, and I was not going to be so close to New Orleans without dropping in for a quick visit. The owner of the the Saints, Tom Benson, was the Grand Marshal of the parade, and he brought along with him his daughter Rita (GM), coaches, staff, and a bunch of popular Saints players. Every other parade watcher was garbed in a Saints shirt, and two girls were sporting pig snouts and wings, 'cause pigs flew when the Saints won the Super Bowl! 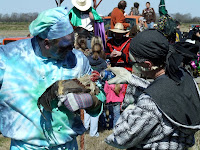 The next few days were passed cavorting around different towns on the Cajun prairie of South Central Louisiana, from Church Point to Eunice to Mamou to Basile and more. Each town has its own Mardi Gras traditions, variations on a theme. 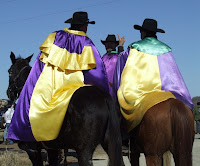 Riders in traditional costumes depart early in the morning, making a circuit around the local homes and farms, collecting the ingredients for a community gumbo (including chasing live chickens). This custom, an ancient European begging and masking tradition, dates at least to the middle ages. 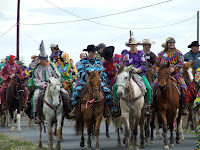 If you miss the departure, how do you find them? Just look for the trail of empty beer cans and horse manure. 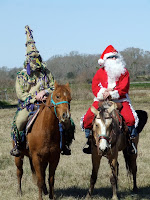 Later in the day--or in some towns, all day long--there's great Cajun music being performed for street dances, because in addition to chasing chickens and drinking, music and dancing are key elements of the celebrations.

If you catch the riders while they are out on their run, don't be surprised if one of them starts dancing with you--there's usually a band wagon at the end of the horse assembly. 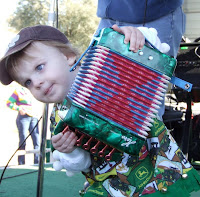 The whole affair is decidedly unlike Mardi Gras in New Orleans, and must be experienced to be understood. Dr. Barry Ancelet gave an excellent presentation on Cajun Mardi Gras, which only added to one's enjoyment of the trip. Enjoy these few pictures, and if you want to undertake the adventure yourself someday, I can take care of that for you... 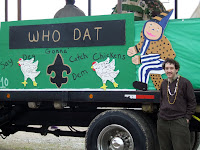 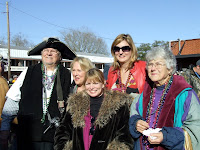