I was promised a meet-n-greet and photo op with Bollywood stars, good food, fashion shows, great music, and a huge Indian shopping bazaar. Doesn't it look like fun? Alternating big stars and singers on a whirlwind weekend in Chicago and Houston. Have a gander at the promotional video and website. Girls-only road trip; Houston, here we come!

What I got was a three-second blurry view of two stars as I was essentially shoved across the stage, so-so food at high prices, fashion shows I couldn't see because I was stuck in the meet-n-greet line, and a few shopping booths (which I also didn't get to visit due to the standing in line problem).

Even so, I went with low expectations. What I experienced was probably the most frustrating and poorly-organized event I have ever attended. It makes all my experience living with Mardi Gras look like an annual picnic in the park. And because both Sara and I have long and productive experience in organizing large events, every little thing that went wrong was another stake in the heart of what could have been.

Yoori and I piled into the car late Friday afternoon and headed for I-45. We fought the mixmaster mélée for a few minutes, but soon enough broke free and set out on the open road. Our timing was perfect for a dinner pit stop at Sam's restaurant in Fairfield, home of tender, flavorful barbecue and mouthwatering homemade pies. It's a challenge to drive to Houston without being sucked into the Sam's vortex, something Yoori would unwittingly discover. I had my usual sliced brisket sandwich with a side of black-eyed peas; I didn't know Yoori was such a burger gal until she passed up the succulent barbecue for a cheeseburger. We shared a piece of coconut meringue pie for dessert and, I have to say, the meringue at Sam's is a work of art.

We arrived in Houston without misadventure and settled in at my cousin Sara's townhouse.

I began the day most delightfully by spilling scalding hot coffee on my chest (leaving a smallish, barely-second-degree burn). Slathered in aloe vera gel, I got dressed...which cute outfit should I wear today? I think I'll save the black fedora for Shahrukh, so for today, let's go black/brown and funky. 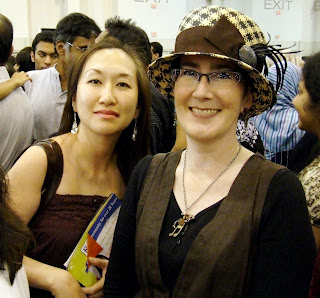 Here are Yoori and I, pretending to have fun.

We arrived at the Reliant center promptly at noon, exactly as we had been told only a few days before by the producer of the event, and exactly as it had been listed in the paper. I had cleverly--or so I thought--bought our tickets online at Sulekha in order to save $10 each over the door ticket price. Now wouldn't you think that the people who had already paid for their tickets should be the first to get in the door at noon and form the line to meet-n-greet? Well, you'd be wrong in so many ways.

First of all, upon our arrival we (and a slew of other people) were informed that the producer had arbitrarily decided that the event would now begin at 1:30. Of course, the Starbucks in the center was closed and you could not exit and re-enter the parking lot, so we were forced to cool our heels (and our stomachs) till then. Well, how about picking up our tickets in the meantime? Nope, the box office wouldn't open till 1:00. When the box office DID open at long last, the employees were not in possession of the tickets for all the people who had purchased them in advance. No one knew where they were or when they would show up. Finally, someone appeared with our tickets and we had to go form yet another line to retrieve them, while everyone else who had purchased them at the door was let into the venue at 1:45. I got my hot little hands on our tickets at nearly 2:00, and of course I could not simultaneously pick up my tickets for the next day (that would have been too efficient). Have these people never heard of e-tickets with a bar code that can be scanned at the door??? The step of having to pick up physical tickets was completely avoidable!

When Yoori, Sara and I gained entrance to the space, I proceeded directly the meet-n-greet line, where there were already hundreds upon hundreds (thousands?) of people ahead of us, thanks to the completely unnecessary delay in claiming our tickets. At this point, we were starving and the first order of business was taking turns getting something to eat. The food variety was not impressive and the prices were high, but it was decent enough. Sara went shopping and found herself some fabulously elaborate ruby and ruby-esque jewelry.

Some Reliant Center security doofus decides she is going to adjust the line, make a snake or something so it will curve back or double up on itself, because it is so long and takes up so much room. She comes up to exactly my point in the line and tells everyone past that point (500 people or more) to move over to form a sideways turn next to a point farther up in the line that she has designated. We go along like sheep. Then it just gets totally screwed up, and she ends up with no plan whatsoever, and has all of us who are facing in one direction turn around and go back to the new end of the line, resulting in the complete reversal in order of half the people in line. Whereas we were formerly close to the halfway point, we're now almost last. Are you following this? It didn't make any sense at the time, either.

Finally, sometime around 3:00, somebody shows up on the stage: it's Katrina Kaif, a stunningly beautiful but relatively talent-free Bollywood star. Line moves imperceptibly for the next hour as she meets, greets, signs and poses for photos with fans. Then she goes to the other stage and has an audience Q & A. Now she comes back to the star stage. Clearly she is starting to fill time for the other expected stars as the day wears on. Shortly after 5:00, she's done.

Meanwhile, on the other stage there has been a fashion show, one or two actually talented and quasi-famous singers, and some questionable other "talent" essentially performing karoake. Now I took a turn to go shopping. I found two gorgeous 3-piece churidar suits, one of a kind and hand made by a Desi designer in Atlanta. They were so much more creative and interesting than the usual suits (although there are many beautiful items even in the world of the usual suits) and I was really excited about buying them after I had tried the long tops on. Typically you can skip even trying the pants because they are loose at the top with a drawstring or elastic, and the long, skinny calf sections are meant to slouch and gather at the ankles so length is not an issue. But I thought that these pants looked awfully skinny all the way up the thighs, so I went to try them on just before handing over my money. Good thing, because they were too tight!! So I saved myself a few bucks there, but then again, since she makes everything herself I have a feeling I'll be looking her up in Atlanta the next time I go to visit my sister. I feel a custom-made churidar suit coming on.

At another booth, I found a cute Anarkali kameez instead and didn't have to worry about pants because it was only the tunic, not a suit. So now I had a sparkly tunic, but still no glittering stars.

end of part one
Posted by Nicole and Mon Voyage at 8:16 AM

Grr, why can't these things start on TIME? You would think they could even start later, since the headliners don't arrive until the very end. At our Chicago event, it was Gulshan Grover and Dia Mirza who had the task of distracting us from the time....on to read part two!

Sorry about your experience. It doesn't surprise me though.

Could you let me know or e-mail me the Atlanta designer? I live in Atlanta and would like to know.