Now I high-tailed it back to the line, where Sara and/or Yoori had continued to stake out our spot in the throng. Still waiting. I was losing track of time at this point...do you decide to just blow the whole thing off after 4 1/2 hours or do you remind yourself of the time already invested in waiting? I called my husband and told him how glad he should be that he wasn't there with me. He would have left and come back to pick me up, no doubt. He then told me about the biggest star of the group (Shahrukh Khan, scheduled for Chicago Saturday and Houston Sunday) having been detained at immigration. About 6:15 or 6:30, Saif Ali Khan--a huge star and a good actor, especially when he is working off a decent script like Omkara, Love Aaj Kal or Kal Ho Naa Ho. Tells some tale about late flight and lost luggage. No one believes him. He flashes the million-rupee smile and starts doing his star duty.

At this point the organizers are pretty much rudely grabbing people and shoving them across the stage and have ceased allowing people to take their own pictures or seek autographs as promised. The crowd is getting cranky, and I'm still far enough back that I don't know if I'll ever make it to the stage. Perhaps 20 or 30 minutes later (close to 7:00), Kareena Kapoor, his real-life girlfriend, arrives on stage to join him. She has developed into a good actress, best roles being in Dev, Omkara and Jab We Met. I guess it takes her a long time to get ready--she should have just come out in whatever she wore on the plane, if indeed they had just come from the airport (doubtful). People pass across the stage, no signing, and the only pics are allowed are from their $10 a pop photographer. This after I was told by the producer that there was no extra charge for pictures (I guess that was for taking your own pictures, now verboten). 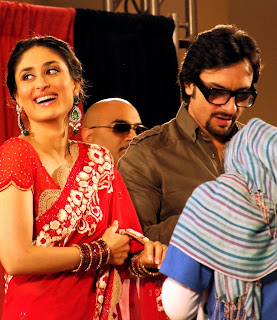 So now we are closing in on the stage at long last. After waiting in a reasonably orderly line all day, then entering a rope-and-stanchion zigzag configuration, we were then just dumped out into a giant, seething mob situation at the side of the stage. People were pushing and shoving from so far back it was as though the crowd were a living, squirming creature itself. It really was almost like a moving sea of humanity. Parents holding babies were getting smashed, I was about to have a panic attack from the claustrophobia, and it was just turning into a nightmare. Some kindly people let me pass through so that I could be on the edge of the crowd.

When we finally got up on the stage to meet the celebs, we were shoved off there so fast that I think I was facing sideways when the photo was snapped (not available yet, natch). I did manage to foist my Omkara DVD on Saif along with a Sharpie, and while I was hoping he would sign his face on the case, he signed the DVD itself. I wanted Kareena to sign too, since they were in this film together and it really represents their best work, but I took what I could get; and in a blink of an eye, I was shooed (pushed) away by the staff. I took a few pics from the ground, and we high-tailed it out of the center about 7:45. There was no way all those people were going to make it to the stars before security shut down the "festivities", and we did not want to be there when everyone figured this out. It could get ugly.

We had planned to go see acclaimed new Indian flick Kaminey but were too tired. We weren't even up to watching any of the four great Indian DVDs I had in my bag. Thank goodness we had plenty of good wine and Sara's tasty food to comfort us after our dreadful afternoon.

We also had tickets for day two, but our experience on Saturday was so unfortunate (bless Yoori and Sara for sticking with me), we decided to try and sell our tickets the next day. I could not believe I was giving up a chance to meet the King of Bollywood, Shahrukh Khan, and have him sign my 2007 birthday invitation, on which we are pictured dancing together. I may be wistful about it after the fact, but I was DONE. As I mentioned before, we had been unable to pick up our tickets for both days at once, so we arrived at 1:30 to pick up our tickets on Sunday (at least we knew this time not to show up at noon). Again, no one was there with the tickets--only this time they did not show up until 2:40. As fast as I could grab the tickets, I turned to the side and found some teenage boys who would buy them for the $25 I paid rather then the $35 they would pay at the door. We could not get out of there fast enough, even though it had cost is $10 just to park.

Thai lunch in Rice Village, a stop at the chocolate shop and we were on our way back to Dallas. Yoori, now having discovered the deliciousness that are Sam's pies, requested a Sam's break along the way so she could buy some pies (chocolate meringue, pecan, and apple or peach crumb). We arrived home around 9:15, I think, and once the car was unloaded and the road snacks put away, I enjoyed a glass of wine and related this exciting tale to my dear husband, who had sweetly encouraged and supported me in taking such a silly trip in the first place.

I'll definitely never forget the adventure, but I wish it were for more pleasant reasons. So yes, it was memorable, but not in a good way*. Why did I go against my very deliberate nature and do something that spontaneous? Why didn't I just stay in Dallas and go to the Indian Independence Day celebration here (Anand Bazaar) for five bucks? Live and learn!

I'm a devoted fan of Indian movies, but I guess I'm just not quite that kind of fan...unless my radio journalist husband gets to interview one of them someday like he has Oscar-winning composer A.R. Rahman ("the Mozart of Madras")and Sonu Nigam (a top Bollywood playback singer). In that case, I'll be there with bangles on.
Posted by Nicole and Mon Voyage at 4:37 PM

Oh, this sounds just awful! Though not too far from our event. Like you, I sat out on the second day even though I had already purchased a ticket and even though I considered my day with SRK a success (a result of pure luck and a quick decision to forego the line, as you know from my post. The "success" had NOTHING to do with the event planners, unfortunately). I'm sad that you guys were whisked off the stage so quickly after waiting in line all that time! Well, one good thing that came out of this is we have found each other's blogs, as you stated on my post :) Thank you for such an honest and detailed description of your day. I hope our posts will give those who hope to buy tickets to an event like this a taste of what they are really and truly like. I find the fliers quite misleading, as I am sure you now do!