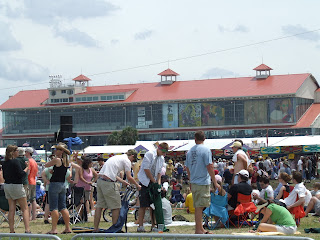 We're between May trips to the Crescent City. Last weekend we headed down to relax with friends and attend Jazz Fest. We were chatting about our Fest experiences over the years, 'cause I've been a regular since about 1982. (I think I went once as a teenager with my mother before that.) I remember in college it always fell at precisely the same moment as final exams and due dates for major papers. Yet somehow I always managed to get there for a day, at least. Granted, when I lived in NOLA it was a tad easier to get there, though wrangling that day off work was a challenge sometimes. I've missed it twice: in 1987, when I was living in Europe, and 2008. That year we returned from Istanbul on the first weekend of Fest and my husband could not disappear from work again so soon for us to catch the second weekend...

So this year we went on the second Friday with our friend Anne and saw The Chilluns, Beausoleil , The Revealers, The Iguanas, Doc Watson, Dirty Dozen & Rebirth Brass Bands, Pinettes (all-girl!) Brass Band, John Scofield and the Piety Street Band, Bonnie Raitt, 101 Runners, and interviews with members of the Fi Yi Yi Mardi Gras Indians and also with Chris Owens (one of my old hat customers). 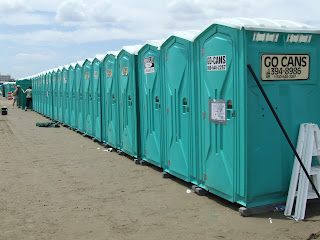 The other main activity of Jazz fest is EATING. This year we ate crabcakes, crawfish sacks, crawfish etouffée, banana bread pudding, and a most refreshing mango freeze when we were burning up in the sun. Also had a caffeine-laden 24oz frozen café au lait later in the day when again, we were feeling a bit piqued from the heat and humidity. The upside is that it didn't rain.

The third thing on a Jazz fest agenda is crafts. There are multiple crafts areas featuring all kinds of artists and artisans. I have two favorites: Robbiewear leather pouches and bags and Diane Harty hats. Thomas Mann was there the first weekend and we were there for the second, so we made what is now a habitual pilgrimage to his gallery on Magazine St.

One cannot fail to run into people one knows, or people one hasn't seen in ages, at Jazz Fest. This year we (deliberately) met up with a few and then ran into a bunch more as we were leaving. 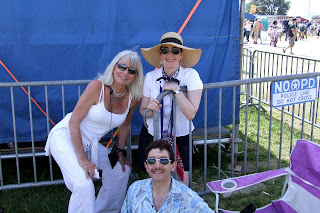 I said we were between trips to New Orleans, didn't I? The next one is another annual event for us and a lot of other folks, the New Orleans Wine and Food Experience. This year's festivities look as enticing as the ones I mentioned last year, so we are certainly looking forward to the extended "weekend" of indulgence. This year's events will be May 19th to 23rd. Famous chefs, endless delicious food, noted winemakers, hundreds and hundreds of wines, seminars, dinners, on and on...NOWFE has matured into one of the premier wine and food events in the country, if not the world; and like I wrote last year: New Orleans...Wine...Food...Enough said! 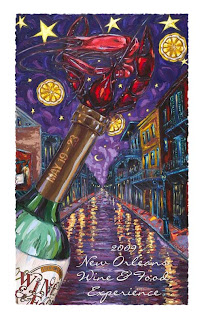 Though we flew last weekend, thanks to some great fares on Southwest, we'll be driving to NOWFE. Why? Because we need to bring home a chest full of fresh Gulf seafood from the seafood market in Westwego! Last year we brought home flounder, lump crabmeat, huge shrimp (at $3.25/lb), and crawfish tail meat. We ate like the king and queen for the next ten days, at pauper prices. Mmmmmm, I will have to think about what to cook! Crabmeat stuffed rolled flounder...crab and yellow tomato salad...crawfish pie...shrimp creole...gumbo...good old boiled shrimp...or maybe some of that shrimp will go into a recipe from my new Indian cookbook...
Posted by Nicole and Mon Voyage at 4:42 PM