The third and last day we spent using ferry transport was to travel up the Golden Horn. In this case, the boat zigzags from the "old" side of the Golden Horn to the "new" (time being relative).

We got off at Hasköy to visit the Rahmi Koç Industrial Museum, which is just next to the ferry landing. The museum contains everything you can imagine that is powered by any kind of motor or engine (from a dishwasher to transportation), machinery used in industrial applications, communications devices, a giant (working) olive press, a submarine (photo), planes, bikes, buggies...for the "how does it work?" geek in the family to the engineers, this place is an unusual spot to kill a few hours. It's quite large, sprawling along the banks of the Golden Horn and into another splendidly restored Byzantine foundry building across the street. There are two delicious-sounding restaurants that are part of the complex but we did not take any meals there. Maybe next time... 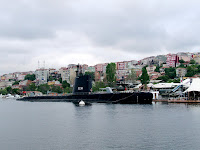 At the appointed time (the boats do tend to run on schedule) we went back out to the landing and hopped the ferry to go up to the final stop at Eyüp. There's a famous cafe called Pierre Loti with a lovely view of the city, recommended both by friends and guidebooks.
At Eyüp you will also discover a beautiful and solemn mosque. It is surrounded by a small market area, no doubt part of the official compound and with rentals from vendors used to support the mosque. Its courtyard is beautiful, with benches and trees and incredible tiles on the walls, and filled with quietly praying Muslims that have perhaps even made a pilgrimage to be there. The mosque complex contains the tomb of Ayub Ansari, Mohammed's standard-bearer, and is the fourth-holiest place in Islam (after Mecca, Medina and Jerusalem). This mosque had a much more prayerful atmosphere than some others we had entered, because it was not full of tourists. It's so much more conservative that I, as a woman, was "invited" to go upstairs. 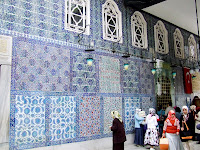 That's ok, I want to respect the traditions of the place of worship. Despite the fact that virtually all my hair was covered with a hat, I still tucked a silk scarf I was wearing under the hat to cover what little bit of hair still exposed. I do want to add that every Muslim I had asked in conversation whether a hat was sufficient head covering for a non-Muslim visitor in a mosque agreed that it was fine. There is an ongoing debate at Trip Advisor on whether a woman should scarf up completely upon entry or if there are reasonable alternatives. Frankly, I have mixed feelings on whether the covering should be necessary or expected of non-Muslims when in a mosque for only minutes. I don't expect non-Catholics to dip into the holy water or genuflect when they visit a Catholic church. I expect people to comport themselves respectfully but not to feign adherence to the religion of the premises.

But I was so taken with the often cute and stylish long coats worn by many Turkish women as a covering that I actually thought about buying one in denim. And of course, the headscarf is practically ubiquitous; but that too is put on a fashionable plane, with many women obviously having taken care to coordinate their scarves with any clothing that was visible. I tried on a couple of jean coats that didn't fit quite right, but had no trouble communicating in sign language with the devout Muslim lady who owned the shop. I shouldn't have waited till our last day, because then I had no time to shop around for a better fit or price...that, too, maybe next time.
Posted by Nicole and Mon Voyage at 2:12 PM